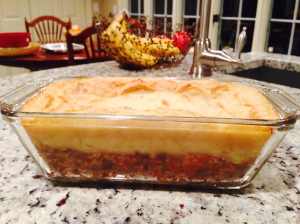 This is an entrée I love serving to meat-loving friends.  It’s fun to watch them try to figure out where the beef is!  It tastes like it’s there, but in reality it’s not.  Invariably, they have to admit this is a great version of the fat-laden Shepherd’s Pie they’re used to.  All the flavor, minus the artery-clogging cholesterol…what’s not to love?

As always, cook once but eat twice.  This recipe is easy to throw together if you have leftover Vegetarian Taco “Meat” https://vegtutor.wordpress.com/2008/04/29/recipe-vegetarian-taco-meat and cooked brown rice in the freezer.

Bottom Layer:  Place Taco “Meat” and brown rice in a large bowl. Saute vegetables in oil for 4 – 5 minutes, then add to bowl with Taco “Meat” and rice.  Add spices, Dijon mustard, and bread crumbs. Stir with a large spoon to mix ingredients. Season with sea salt and pepper if desired. Spread mixture in an oil-sprayed glass casserole dish.

salt and pepper to taste

Spread thick layer of mashed potatoes on top of the bottom layer of Shepherd’s Pie. Top with vegan parmesan cheese or Gomasio if desired.

Cut into thick slices and serve with vegan gravy.

Chen Vegetarian House is an all vegetarian Asian restaurant with a full menu of vegetarian dishes to choose from…just what the health-minded people of Berks County have been waiting for!  Tonight was our first visit there and I was impressed.  We will be going back!  Although this is a small establishment, probably more geared to take-out than dining-in, our experience was entirely enjoyable.

We entered the newly remodeled restaurant (next to Haute Chocolat) and were promptly seated at one of the two tables by the window.  Several other tables were available near the take-out counter.  Our server answered all our questions and explained the menu (Yes, EVERYTHING on the menu is vegetarian — even the chicken, the beef, the pork, and the seafood).  They do not use MSG in any of their food.  We talked and drank green tea until our dinners arrived.  The spring rolls were piping hot and very fresh (not frozen and reheated).  My Pad Thai was delicious, seasoned perfectly with not too much “chicken” and lots of crunchy bean sprouts.  My husband ordered General Tso’s “Chicken” (his favorite) and we were both impressed by the quantity and presentation.  Our meals were delicious and the service was efficient and courteous.

If you want a healthy and delicious meal for not a lot of money, then I would highly recommend Chen Vegetarian House.

As a Health Minister, one of the statements I often hear is, “But people in the Bible ate meat.” I encourage you to read below and learn the facts. The diet in Bible times did not in any way resemble the Standard American Diet. To read the complete article: http://healthtip.hacres.com/index.php/2013/02/12/how-to-stop-cheating-on-the-hallelujah-diet?

In Bible days, there were societies of pure vegetarians while other societies consumed some animal products – animal flesh and goat milk. However, even in those societies where animal flesh was eaten, consumption was extremely limited and confined to special occasions because the ancients had no means of refrigeration.

For this same reason, goat milk was consumed in its raw state almost immediately after milking. It is also important to note here that almost all milk consumed in Bible days was goat milk. Even to this day, The United States is one of the few countries in the world that consumes more cow milk than goat milk.

It is also interesting to note that in Bible days, the fat content of grass-fed animals, which was all they had to eat, was around 3%. This is the fat content that you will find in wild deer to this day.

With the consumption of ever increasing amounts of both animal flesh and dairy, physical breakdown from these animal source foods began to manifest earlier and earlier in the lives of those who consumed them. In fact, my research reveals that animal source foods, both flesh and dairy, are the cause or contributing cause of as high as 90% of all the physical problems being experienced today.

What is the perfect dinner for a cold winter evening?  A steaming bowl of heart healthy chili!  This recipe will provide mega protein and fiber with very little fat and calories.  It’s a very simple recipe made with common ingredients, and is delicious with or without the optional ingredients. As a bonus, you can also throw everything in your crockpot and let it cook on LOW all day.  Dinner will be ready when you return home!

1 large onion, chopped and sautéed in 1 Tbsp oil (if you have the time)

Optional Ingredients (use any or all as desired):

a little cayenne pepper or Tabasco Sauce (to warm you from the inside out!)

Cover and simmer all ingredients for 45 minutes, stirring occasionally.

Add 1 pkg. Morning Star Farms (frozen meat substitute) Crumbles, and cook for an additional 15 minutes to heat crumbles.  Remove from heat and enjoy with salad and warm cornbread.  Mmmm-m-m-m! This chili tastes even better the second day, so look forward to any leftovers 🙂

Do you ever get tired of leafy green salads?  With gardens producing just about every vegetable imaginable right now you might want to throw together a colorful vegetable salad that contains no lettuce at all.  The ingredients in this crunchy salad can be altered to accommodate whatever vegetables you have on hand; for a surprising burst of flavor throw in your choice of olives (I like kalamata olives), pickles, banana peppers, or sun-dried tomatoes.

It will be more flavorful if you steam the heavier, more dense vegetables for a few minutes — not too long, just until the color brightens but they still retain some crispiness. Any Italian salad dressing will work well, and it always tastes better the next day after flavors have had time to marinate. Makes a great lunch!

1 can chickpeas, rinsed and drained

Lightly steam cauliflower, broccoli, and carrots until just crisp tender (they will be easier to chew and absorb more flavor if steamed). Cool quickly in very cold water and drain.  Place in a large bowl, add other ingredients and your favorite Italian dressing. Toss to coat everything with dressing and allow to marinate for best flavor (good to make the day before). Serve cold.

Mikura is a new Pan-Asian restaurant at the site of the former China King in Wyomissing.  China King was one of our favorite take-out restaurants, but I must admit the dining area was tiny and decor minimal, so we didn’t eat there often. Since Mikura has taken over this location the changes have been dramatic: The restaurant has doubled in size, and they have done major remodeling. It is now decorated in a sophisticated modern Asian theme, dark wood, colorful dimmed pendant lighting, and “stone” wall.  Everything is new, clean and inviting, and the staff goes out of their way to satisfy every request.

I am happy to say the food is still delicious, and the menu has expanded to include many new dishes!  The sushi bar is brand new, and they also offer party trays for office and home catering. They have kept their famous, very reasonably priced ($5.99/person or $5.45 for senior citizens) lunch buffet, although there is not much on the buffet for vegetarians.  We have found that ordering from the menu is a better option for those wanting non-meat dishes.  If you see something you’d like on the regular menu they will do their best to make it vegetarian for you. The menu also includes many vegetarian entrees ( I counted 17, but as stated, they will make any substitutions for meat if you ask).  Some items on the menu are listed as gluten-free and brown rice is available on request if you prefer that to white (yes!).

One ingredient I really love, one that gives vegan recipes a real “cheesy” flavor without all the negatives of dairy, is Nutritional Yeast.  It is also a good vegan source of vitamin B-12!  To learn more, or to experiment with some great recipes using this little known seasoning, visit the link below or simply try some Nutritional Yeast sprinkled on a bowl of warm popcorn.  Yum!

God designed our bodies to be healthy. Learn how to take control of your health by eliminating toxins and following the nutritional plan that God intended for us. Totally FREE, but space is limited, so please register today!

Today the Reading Eagle did a nice piece on Van’s Cafe, the new Vietnamese restaurant in West Reading, so we had to go there for lunch to try it for the first time.  For those who are familiar with West Reading, Van’s is occupying the same space as the former Fire and Ice Cafe. The place is casual, the decor minimal, but clean.

I hope I can give it a fair review because my main thought about Van’s is that they won’t win any prizes for speed.  We went on our lunch hour, which was a mistake — don’t go there unless you are under no time constraints.  After sitting at the table for about 15 minutes we went to the counter to order.  I still don’t know if that is how you are supposed to do things there; some people did have a waiter come to take their order, but we and others went to the counter.  No one greeted us, seated us, or told us what to do (a simple sign “Please place your order at the counter” would have been helpful).

The food was very good and fresh.  They had a few vegetarian options.  We both ordered the Vegetarian Spring Rolls and Vegetarian Rice Noodle Soup (huge bowls) called Pho.  I don’t think the soup broth was vegetarian, however.  Service was very slow and disorganized. (I could see my husband’s blood pressure rising by the minute).  Our appetizer came out after the noodle bowls, and I don’t think we would have gotten it at all if we didn’t remind the server.  We were missing a set of silverware and had to hunt one down ourselves.  No one came to freshen our ice teas or offer water.  As we ate we saw people leaving and more coming in and standing waiting to be seated.  Tables weren’t cleared as new orders were coming out and there was nowhere to put them or to seat the people who were waiting for a clean table — Did I mention that the service was SLOW?

Prices at Van’s are all under $10.00, and the food is good.  Convenient parking is available in the rear. I am hoping that this was not a typical lunchtime at Van’s, and that they were just having an off day.  I would love to go back to sample their bubble tea, but I know my husband won’t be going next time.  With some people you don’t get a second chance.

This article answers perfectly the most frequently asked questions about a vegan diet.  Please be informed and educated, not blindly led by deceptive advertising into an early grave. 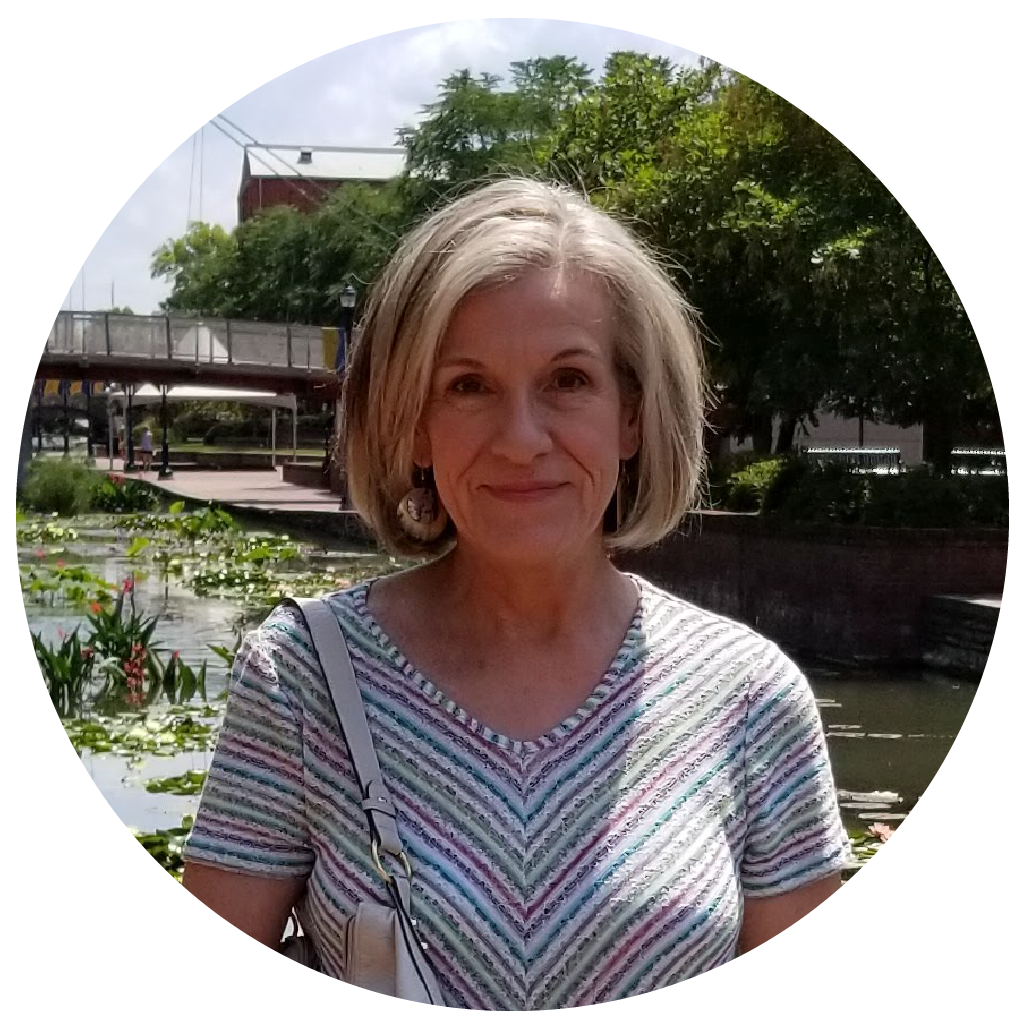 Hi, I'm Jayne and welcome to my site.
More about me